ByCal Orey
"I have measured out my life in
coffee spoons."
--T.S. Eliot

Yesterday, Saturday November 15, I traveled off the hill from Lake Tahoe to Sacramento for a book signing.
My Healing Powers Series was the featured guest and I was pleasantly surprised.

COFFEE ATTRACTS CUSTOMERS!... For years, my two popular books The Healing Powers of Vinegar and Olive Oil have been the workerbees or brainchild kids that work for me. I'm talking translated in more than a dozen languages, featured in major books clubs, in the Newsmax store, Walmart, and national magazines to radio talk show topics. But at the very elegant Roseville bookstore things changed!

The mass market editions (same book, smaller books) didn't draw as much attention as COFFEE and CHOCOLATE. People talked to me about the health perks of both these neglected once bad foods gone good. It was delightful! Of course, the drawing we offered to win gourmet coffee and Godiva chocolate helped draw attention. And there were four winners! 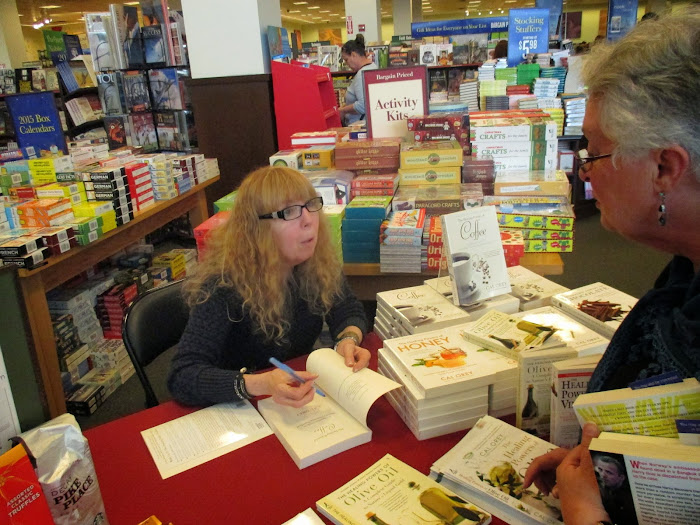 BOOK SIGNINGS, PAST AND PRESENT... As noted in my last blog post, I've done dozens of book signings from a busy gathering at the Seattle, WA bookstore to Palmdale, CA (both geologist Jim Berkland and I were on local TV dishing quakes on the San Andreas). Some signings I read and have a sit down audience; other signings I meet and greet people and chat one-on-one. Both formats work for me.Yesterday, it was a combination. Actually, I will take a vow of silence today because I talked so much! In will drink tea with honey to soothe my sore throat. The people who visited me were fascinating. Not only did they purchase my books, I enjoyed the vast variety of conversations with people and both genders of all ages.

GOING BACK HOME--A SPOOKY SCI-FI DARKER CHALLENGE... Traveling with my adventurous sibling is always fun, sort of. Ironically, we got there easily following mapquest. On the way home, thanks to the eerie know-it-all lady's voice who led us on GPS Navigator--it was a segment out of a Twilight Zone episode. We were duped and got lost on the long, winding road in rural areas headed for Placerville. It happened once before but it was daytime. This time around it was in the dark. You're supposed to drive 20 mph but we were forced to go faster because of people behind us. Think amusement park ride without amusement. In retrospect it was exciting driving all alone without lit roads. I couldn't help but get images of sci-fi films I've seen when the characters get lost in remote regions and monsters appeared. It took us three hours to get back home unlike the two hours mapquest route that allowed me to be at the store an hour early.

I confess I did kennel my dog duo. They will get the pampering--extra walks, brushing (teeth and coat), treats and toys, and piped in music. I forget Simon's blanket and I didn't label their different dog chow... When I arrived home I knew it would be zen-like. My Siamese kitty Zen was waiting for me full of purring and snuggles. I got to sleep in until 10:30 AM. Bliss.

The dogs? It's 5-6 AM every day and midnight last call. Vacation day/night. But today in the afternoon I will help my boys escape and all will be back to normal. I pray the sensitive Aussie doesn't have attitude and piddle on my comfy, plush comforter form SAC. Psst. I haven't told them yet about my short trip to Reno bookstore for the next signing on January 3, nor my second longer Canada trip. Well, Santa will bring gifts and lots of love the next month and a half to make up for my absence. And we will all live happily ever after.