Cinnamon Honey Butter turns an ordinary slice of bread into sweet buttery heaven. All you need are four minutes and four ingredients to make this easy delicious spread. It’s the perfect butter to put on my Texas Roadhouse Rolls! 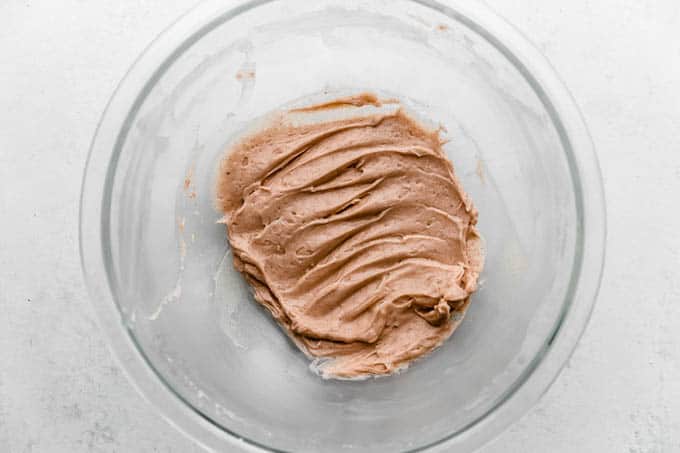 Have you ever been to a Texas Roadhouse? It’s a chain restaurant that’s probably best known for the fluffy yeast rolls they bring you with your meal.

I’ve written about those them before because they really are worth all the hype they get.  But you wanna know  what really elevates them to “unforgettable” status?  It’s the sweet cinnamon honey butter that comes with them.

I’m a sucker for any kind of butter but those fancy flavored butters you get at restaurants are one of my weaknesses. The first time I bit into a warm yeast roll spread with cinnamon honey butter, I think my eyes rolled back in my head a little. It was one of those tastes that makes you want to just close your eyes and savor each and every bite.

I knew it couldn’t be too difficult to make cinnamon honey butter at home. Before I even made the honey butter for the first time I was already dreaming of spreading it over fresh slices of Grandma’s Italian Bread  or dabbing it on top of Pumpkin Muffins. 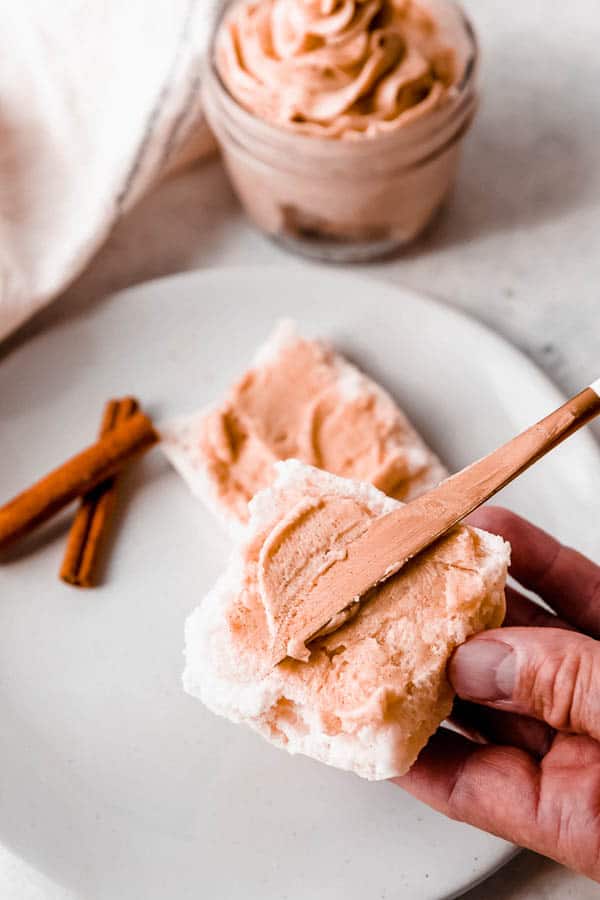 It turned out that homemade honey butter was not only easy to make it was even more delicious than the restaurant stuff! It’s high time I dedicate a whole post to this amazing spread.

Just be warned. Once you know how to make cinnamon honey butter, you’ll want to make it ALL. THE. TIME.

Actually, that sounds like a pretty sweet life to me! Go right ahead and make this cinnamon honey butter and spread it on whatever your heart desires.

How do I make this Butter Recipe?

This honey butter recipe is incredibly easy. It requires just four ingredients and about four minutes:

All you do is whip the ingredients together for a few minutes with an electric mixer until you achieve light fluffy buttery perfection. Put it in a serving dish to serve right away or plop it into a Tupperware container to keep. Bam! Almost instant honey butter.

The stand mixer fitted with the whisk attachment made this recipe extra easy and quick. A handheld electric mixer will work just as well! 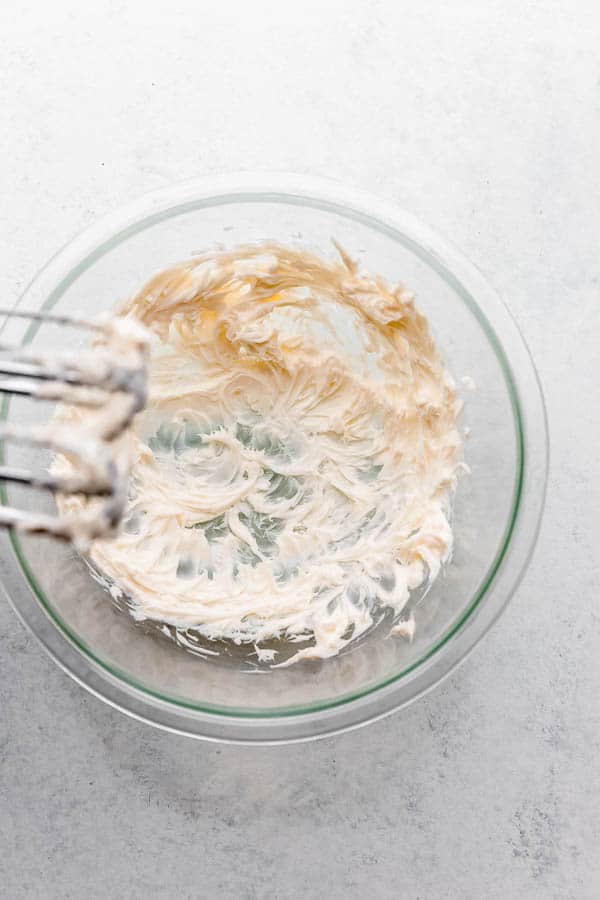 This one is nicely whipped and just sweet enough with the confectioner’s sugar and honey. And the cinnamon? Oh, the cinnamon is what really shines. 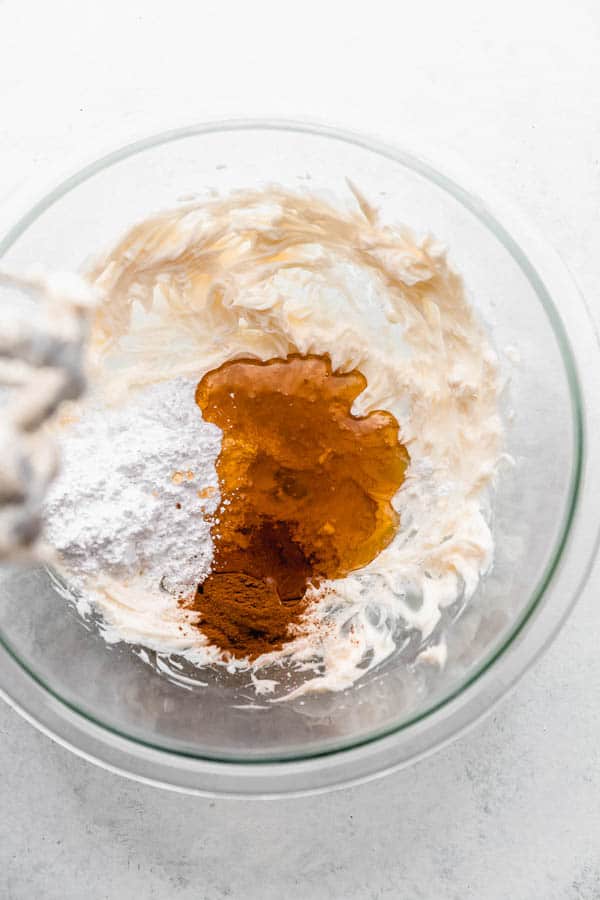 There’s only a teaspoon of cinnamon in the recipe so it’s far from in-your-face overwhelming. But that little touch of sweet spice makes this honey butter extra special.

I use salted butter in my recipe to keep things as simple as possible. If you only have unsalted butter, you can use that, too. Just add a pinch of salt to the butter before whipping.

SAVE THIS EASY CINNAMON HONEY BUTTER RECIPE TO YOUR FAVORITE PINTEREST BOARD! 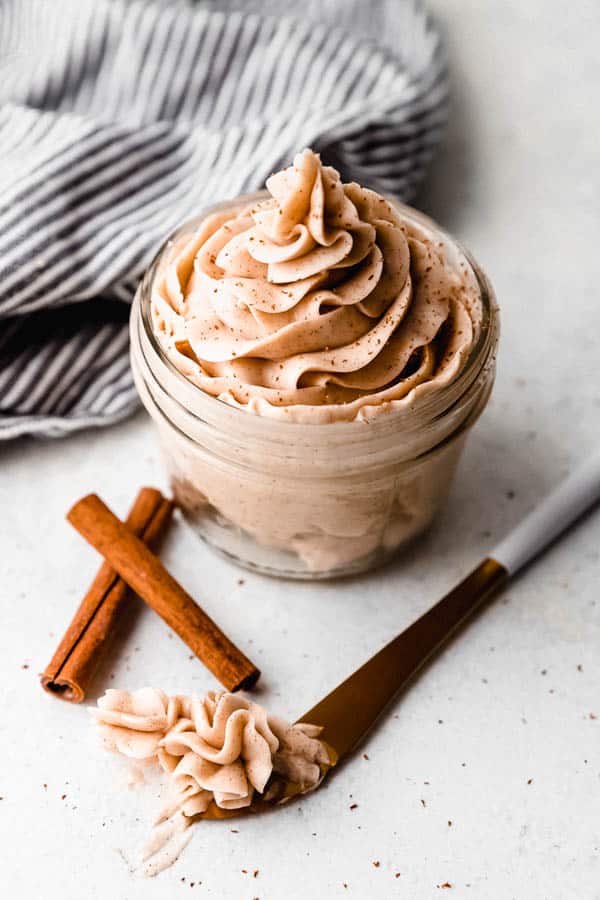 This recipe makes a spread that’s just like the one you’ll find at the Texas Roadhouse. Only it’s even better because you didn’t have to leave home! Anytime I can enjoy my favorite restaurant dishes without having to get out of my pajamas is a good time.

How do I store this Easy Cinnamon Honey Butter Recipe?

This recipe makes about a cup of honey butter and can be stored in an airtight container in the fridge for up to a month or at room temperature for a couple of days.
If you refrigerate the butter, bring it to room temperature before serving so its soft and spreadable.

Cinnamon honey butter incredible on homemade baked goods of all kinds but can also instantly make a store bought roll more special!  Everyone is impressed when I serve it at a dinner party. I love when people dig into the butter dish expecting plain ol’ butter, spread it on a roll, and instantly look at me with wide happy eyes. 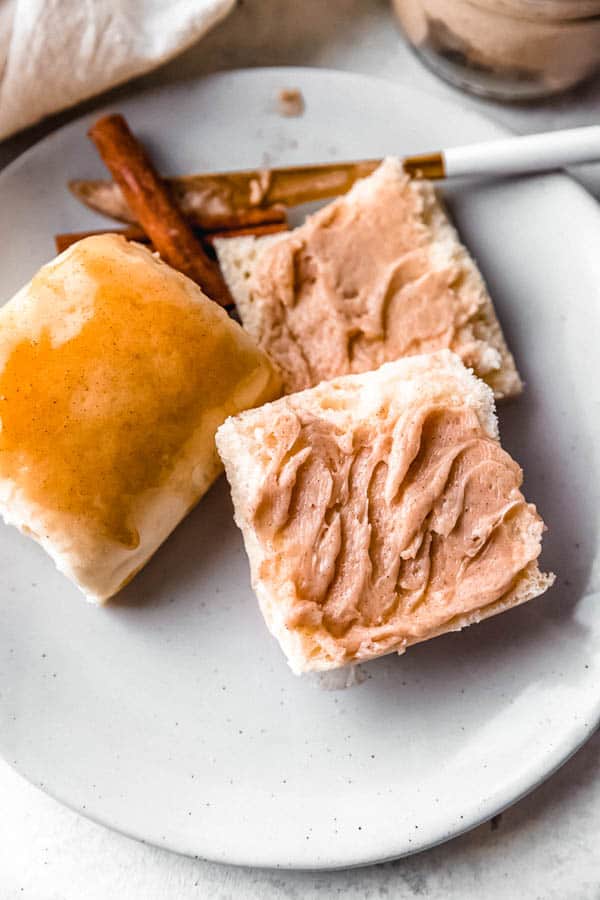 They’re always surprised to learn that this butter is homemade and doesn’t take any special ingredients or fancy equipment. I’m so excited for you to try it too! you’ve made your cinnamon honey butter, there’s no shortage of ways you can serve it. My first recommendation would be to get in the kitchen and make a batch of my copycat Texas Roadhouse Rolls. This butter and those rolls are a match made in bread-lover’s heaven.

Anytime I bake muffins, I like to cut them in half while they’re still fresh from the oven and spread the insides with soft butter. When I have cinnamon honey butter around you can bet it’s my go-to spread for Cinnamon Streusel Muffins and Cinnamon Roll Muffins.

What sounds better for a big family breakfast than a stack of Zucchini Pancakes or Whole Wheat Pumpkin Pancakes with a dollop of warm cinnamon honey butter melting down it? This honey butter is also phenomenal on waffles, alone or with a heaping helping of real maple syrup.

Is your mouth watering yet? 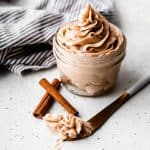 This Easy Cinnamon Honey Butter Recipe is delicious on a slice of bread or on my Copycat Texas Roadhouse Rolls recipe. It'll be your new favorite butter!

Are you looking for more homemade spreads for your favorite rolls, breads and muffins?