Hi, Friends,
How are you? I hope this finds you healthy and blessed.
Can you believe that we have already owned the East Texas house for eight months?
I thought I'd give you a quick update on our progress thus far.
We had a massive amount of rain in May and early June.
The green beans loved it up to a point. 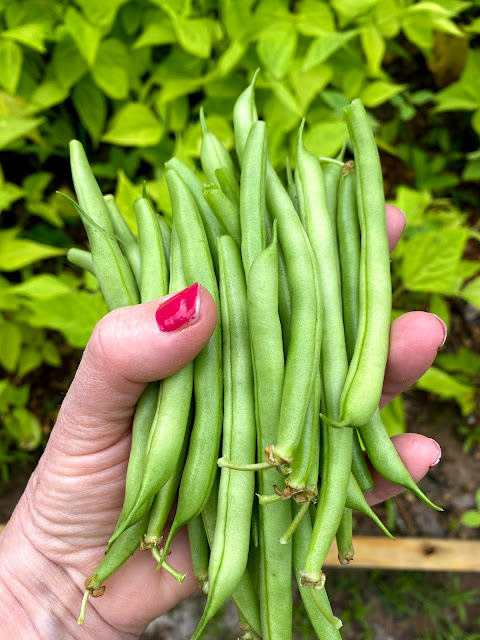 We ate green beans about five times and that was enough for me. 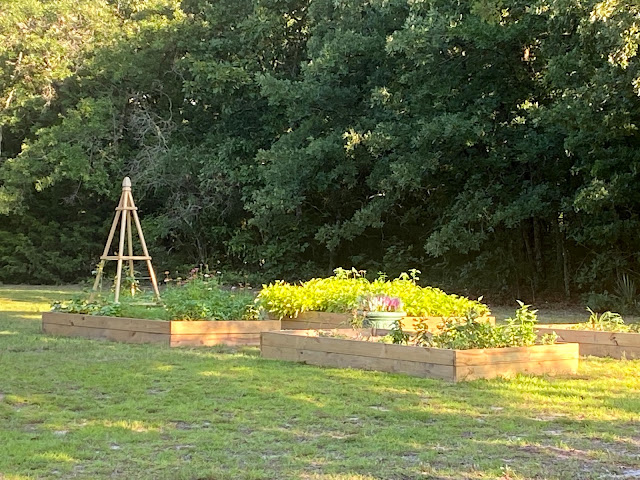 The green beans began to turn yellow.
I don't know if they were spent or if they got too wet.
When we left each Sunday, there was always plenty of rain in the forecast so that I didn't worry too much about supplemental watering.
I should have had a better plan by the heat of the summer. We were staying home on Father's Day weekend and there was no rain in the forecast. In fact, it was going to be hot. I set up a sprinkler on a timer but for some reason, I was very hesitant to turn it on at the spigot. The water pressure seemed terrible. Our yard at home is watered with timer run sprinklers. In the town we have city water, not well water. We've never had a well. Our neighbor usually checks on things midweek for us. (We have not asked him to do this for us but he runs his business out of his property so he has a vested interest in making sure things in the neighborhood haven't been tampered with.) On his weekly check, he noticed how dry it all looked so he began to water for me. He noticed a problem with the water pressure as well. He thought a pressure gauge was on the fritz. Watering could have burned up the pump. I'm so glad that I listened to my inner voice that said to leave the water off.
Bill watched a bunch of YouTube videos and was able to fix the gauge last weekend.
The makeshift sprinkler system is up and running so we should be fine for the rest of the summer but the beans and cucumbers didn't survive the hot week. 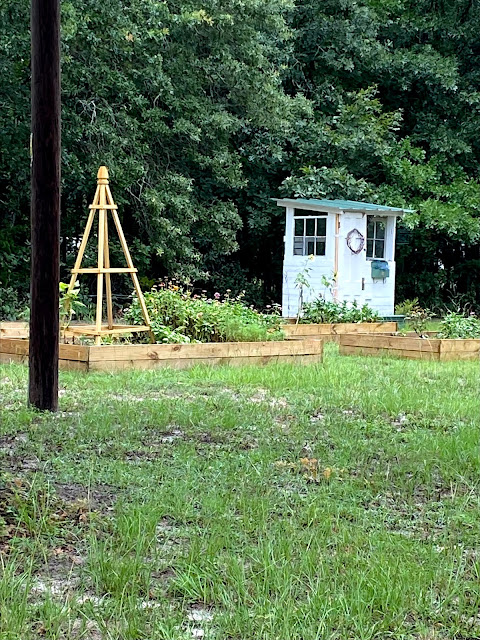 Bill built a wooden obelisk also called a tuteur for me. It anchors the cucumber bed and adds some structure and interest to the garden. 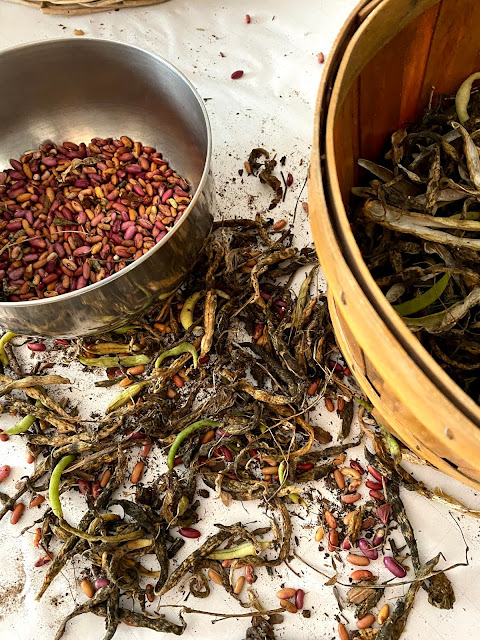 I picked all the dried beans so that I have more seeds to replant. I got some squash seeds and some additional cucumber seeds to get another small crop going. 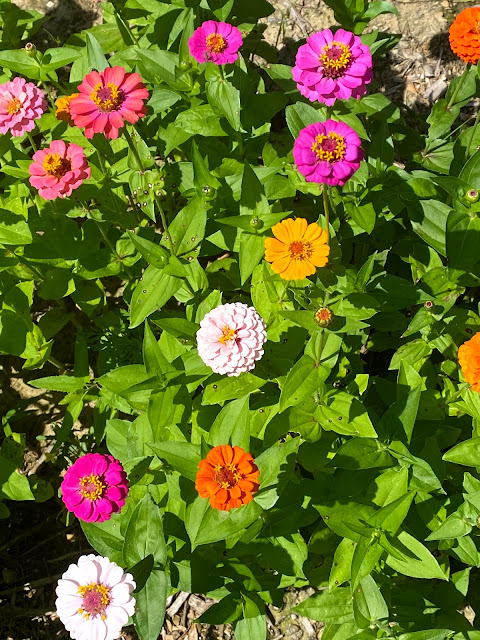 The zinnias are fabulous according to the grasshoppers.
If you have any ideas about how to protect my flowers, let me know. 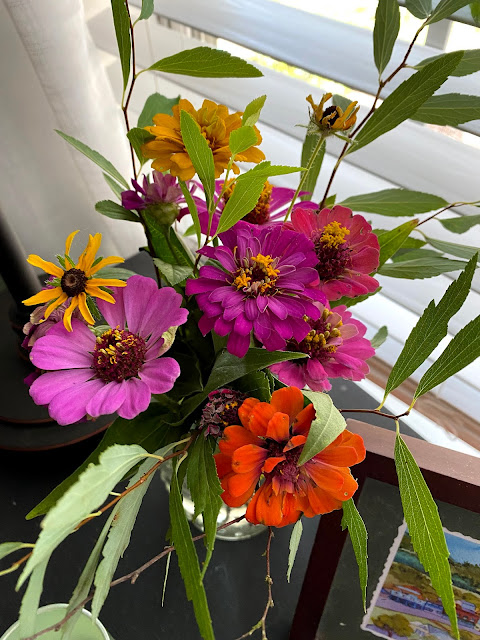 I managed to cut a few that weren't being eaten.
The dirt that we ordered isn't the best quality. We added some humus and manure last weekend. Hopefully, over time we will be able to improve the soil. We'd also like to add a few more beds. These are 5' by 10'. I love them but 5' is a little too deep and I'm not able to reach the center of the beds. I'd like them a tad smaller but 5' by 10' meant there was no wasted lumber. That is important right now because of lumber prices.
Bill put shelves in the potting shed for me. He used wood left over from the Quonset hut. 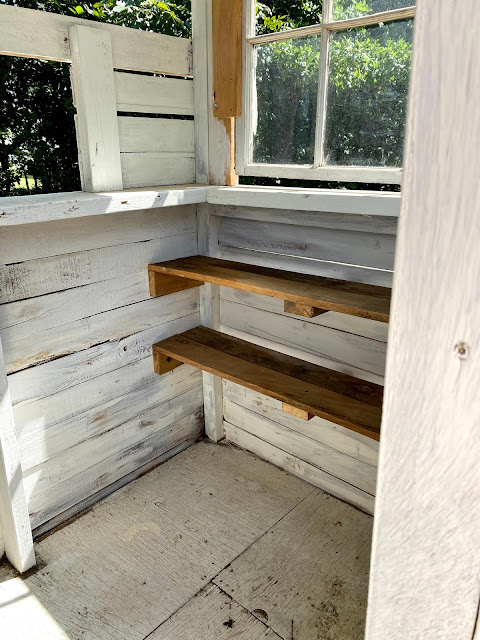 This will be a great little spot for extra garden tools. Here is the original post about its transformation from an ugly deer blind. It's one of my favorite upcycles so far.
I need to check estate sales for an extra set of inexpensive tools. 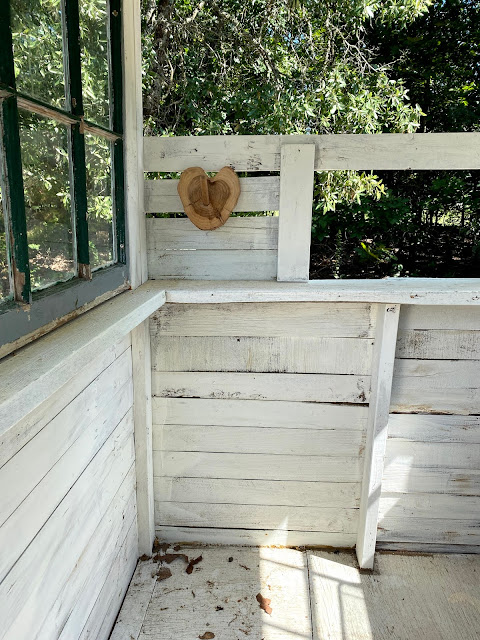 The wooden heart was the toilet paper holder in the cabin. I rescued it from the trash. I just had to save this remnant from the cabin.
This area of the yard brings me so much joy.
The neighbor commented that he thought it was too much sun.
Our house in town has almost zero sun. I was tired of fighting the shade.
If zinnias can grow in between the street and the side walk, they can grow in the raised beds out here. 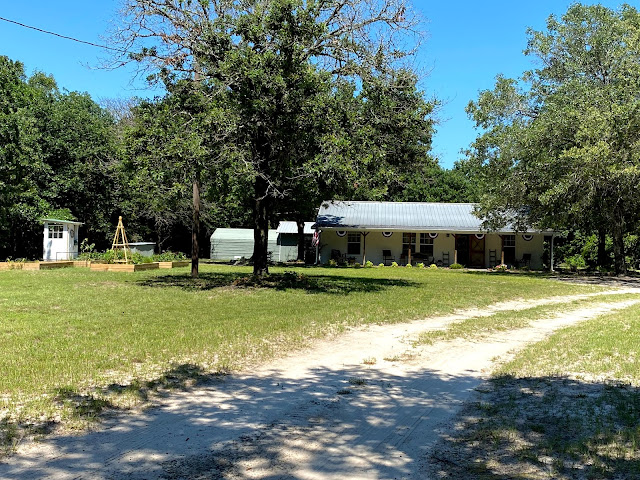 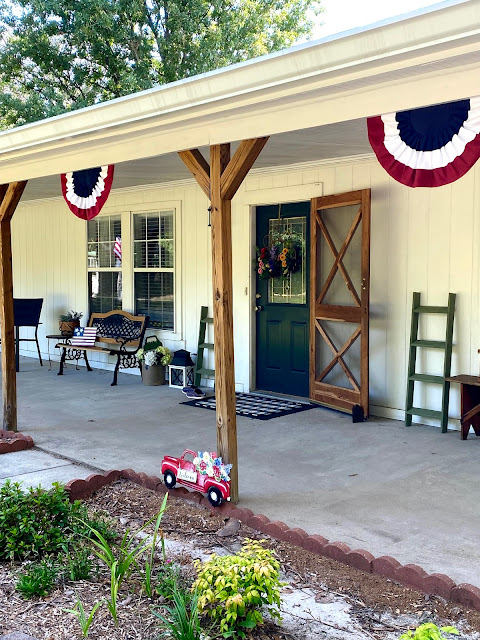 Hobby Lobby had some bunting so we hung that up at the last minute. 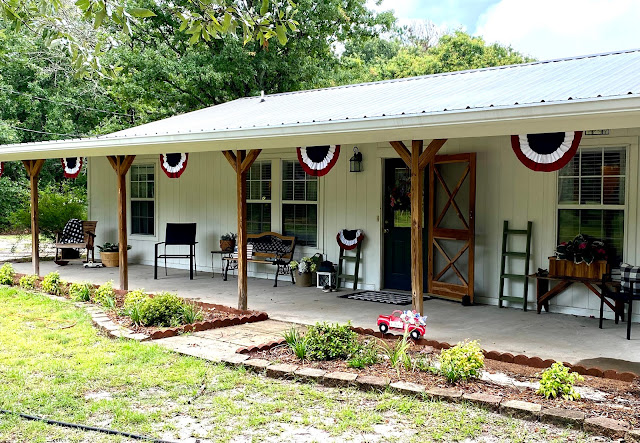 While I was busy in the front, Bill worked on the stock tank pool. 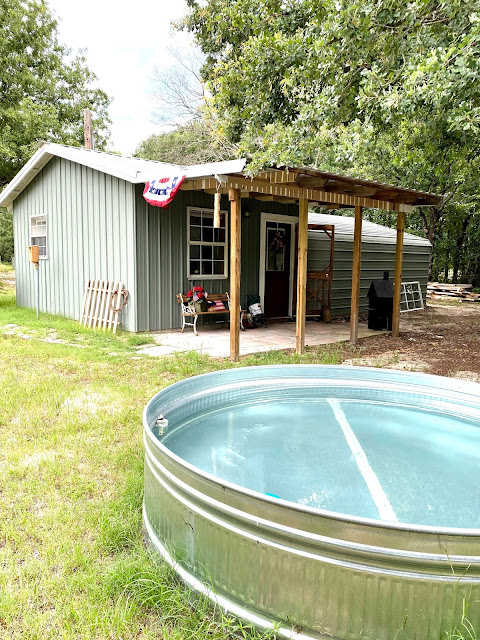 Back in May, we couldn't get our hands on the same kind of pool filter that we have at home so we bought another brand. It took weeks to come in. When it did, it leaked! It also spewed green gunk in our crystal clear water. Bill was so frustrated. He's returned that piece of junk and a new Intex sand filter has already arrived. It arrived a day after I ordered it. The price had also dropped a few hundred dollars since May.
Maybe they overestimated back yard pool sales for 2021.
We took some time off and went antiquing which was fun. 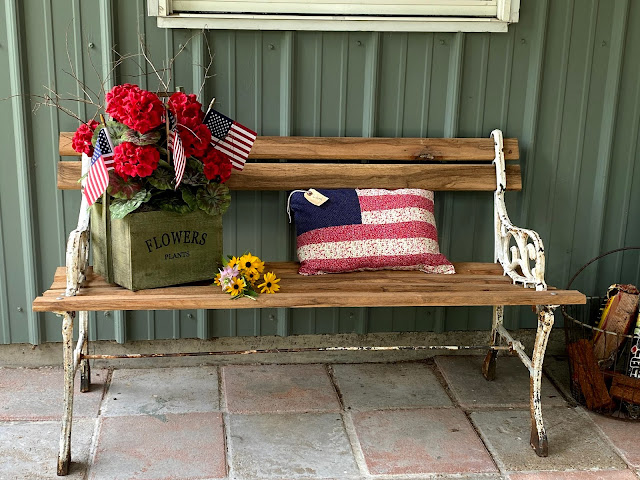 I also played with 4th of July decor.
I reached a point where the ceiling fan in the living room had to go.
One of my first impressions upon walking into the house was that the fan was way too big. It felt like it could chop off my head and I'm only 5"2' Bill felt the same way but we didn't hate the fan so it stayed while we took care of other stuff. 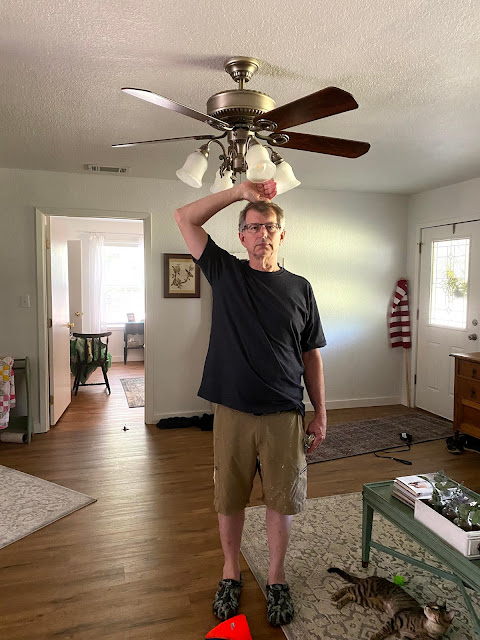 Bill took it down and we donated it to the thrift store. Instead of a ceiling fan, I got the Buford Wood and Metal 4-Light Ceiling Light from Lamp's Plus. We're got a table fan instead. 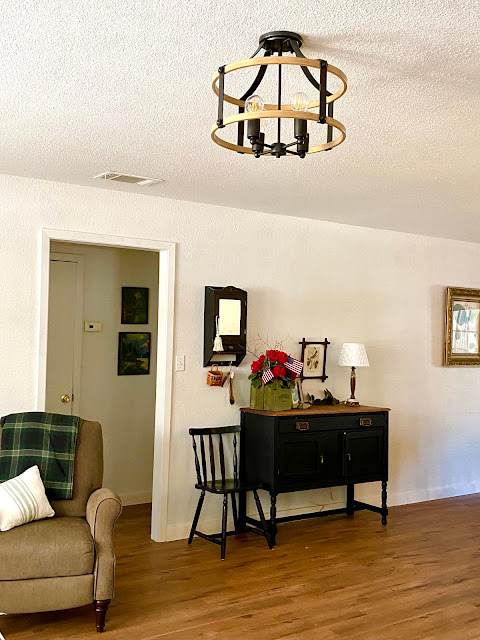 I really love it. 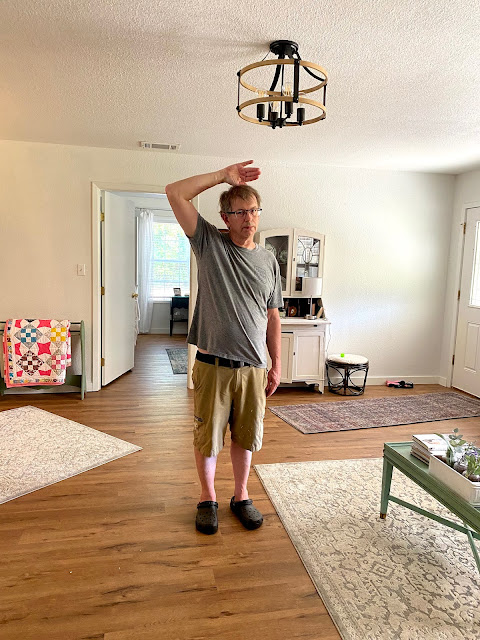 Here is what is coming up in the near future:
The countertops arrived. We'll start installing them in a couple of weeks. It will be a great project in August when it is too hot to be outside. We went with butcher block. It's within Bill's skill set to DIY. I don't think that the counters will be hard to maintain since we are only here on the weekends. They can be sanded and refinished if needed.
I'll be thinking about the backsplash in the meantime. I'm excited to get this crossed off of the list. 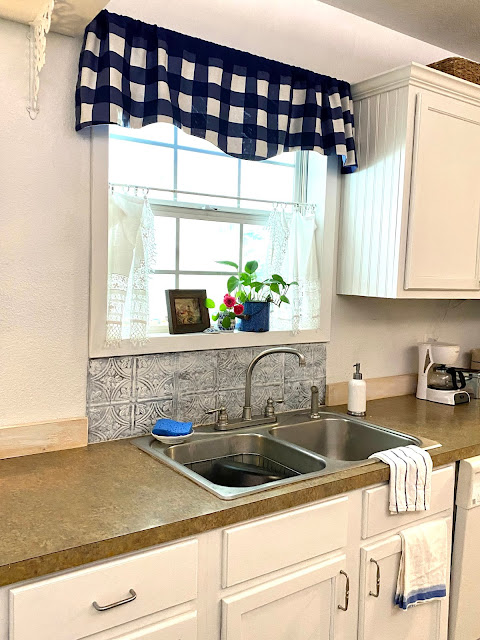 Bill plans to fix the leaking roof on the Quonset hut. Once that is fixed, he can start the electrical.
Then he can begin getting it air tight with a garage door on the North side.
Right now that side is open. 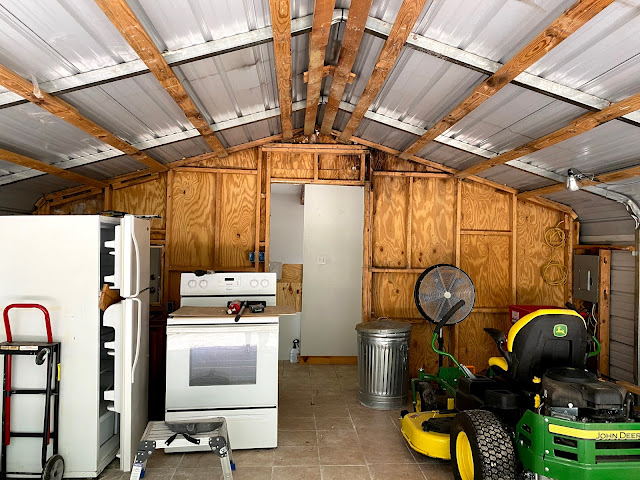 He's removed a portion of the wall in the left side of the above photo. He'll rebuild that wall and add a door and a window.
Once that is done we can organize the Quonset storage area and begin the working on the cabin.
Bill would still like a bathroom and a sink in the cabin. We're not sure how we're doing that at this point.
He's ordered a metal carport for his boat. In the image below, it will be right across from where the truck is parked.
He's got a lot of clearing and leveling to do before it arrives in October or November. 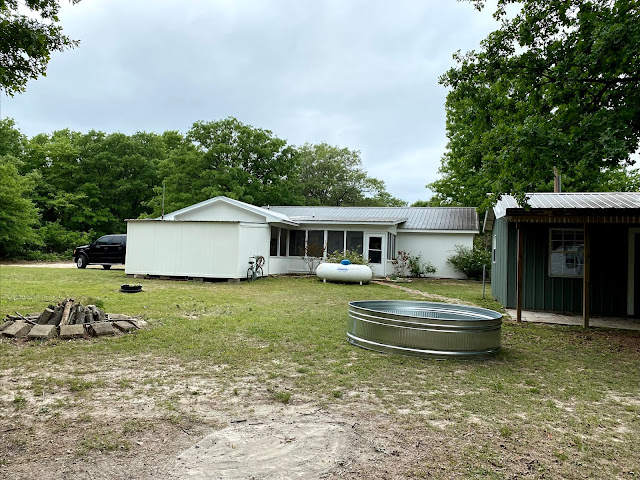 The next image gives you an idea of how wooded this area is. 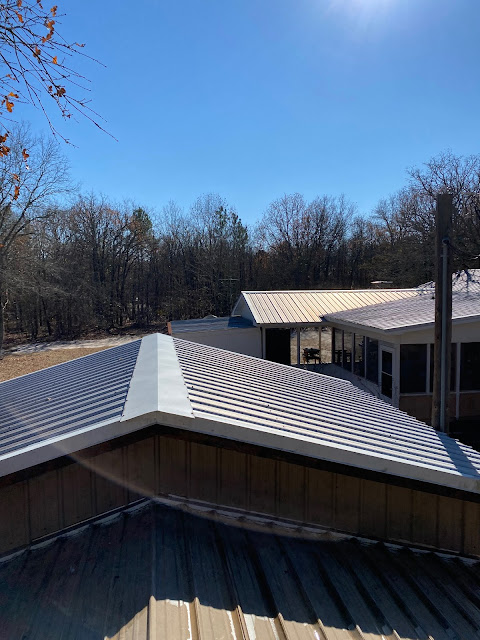 We can snug it in without chopping down any of the bigger trees.
It's too hot to do much clearing right now but he'll probably work on it on cooler mornings.
My wish list items include:
a picket fence around the potager garden and an arbor gate entrance
a green house made from windows
a window for the laundry room
faux beams in the living room
paths in the woods
new shower surrounds and vanities in our bathrooms
I've been playing with furniture placement. 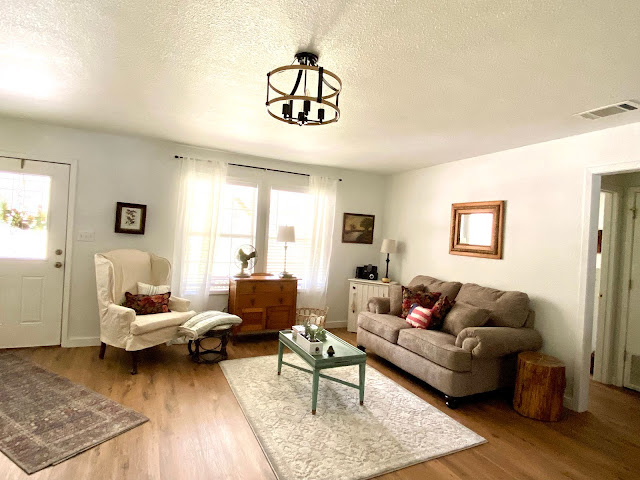 We like it. It seems bigger and more welcoming for some reason. 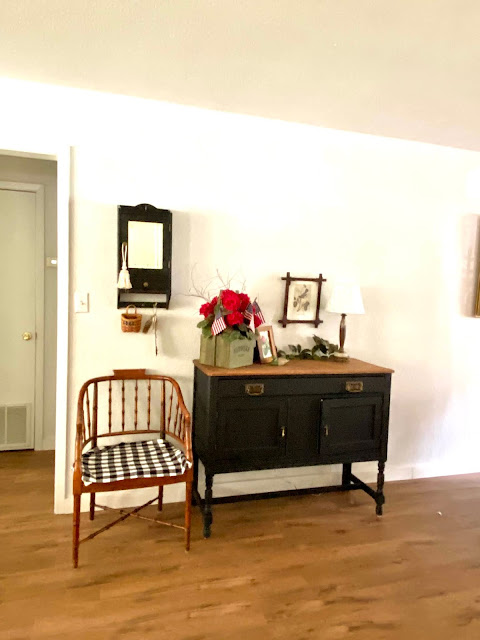 I recently stripped and repainted the buffet. It was in our dining room at home.
The bamboo chair was a thrifted find for only $29.00. The cane seat was torn so Bill removed it and cut a plywood seat for me. I'll upholster it this weekend.
Hobby Lobby had a really cute red mini buffet on clearance. 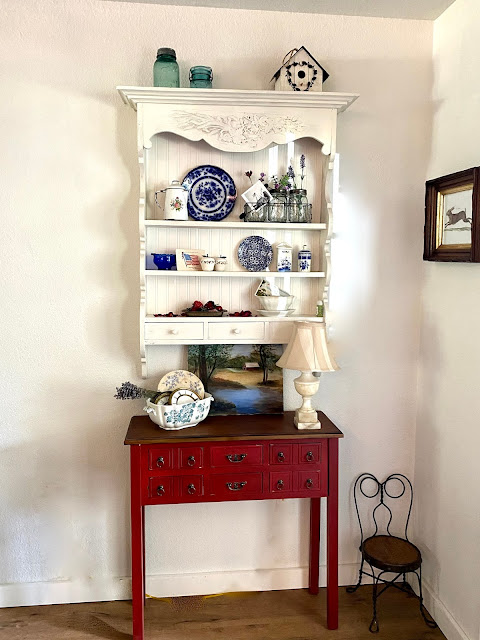 How long do you think it will be before I paint over the red?
The little painting came from our antique outing.
We had our own little fireworks display on the 4th of July. 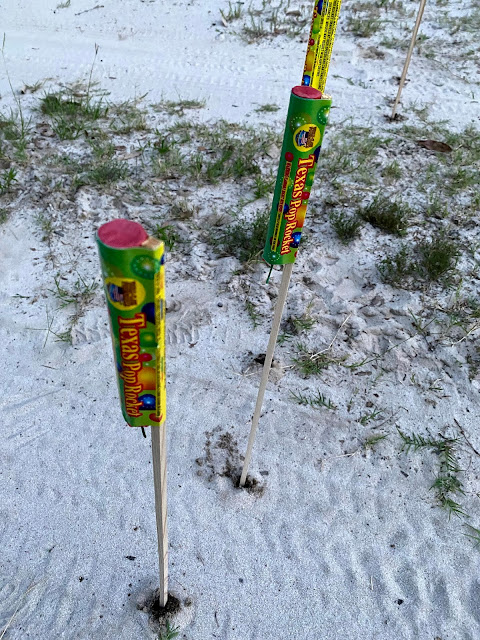 Bill really got a kick out of it. 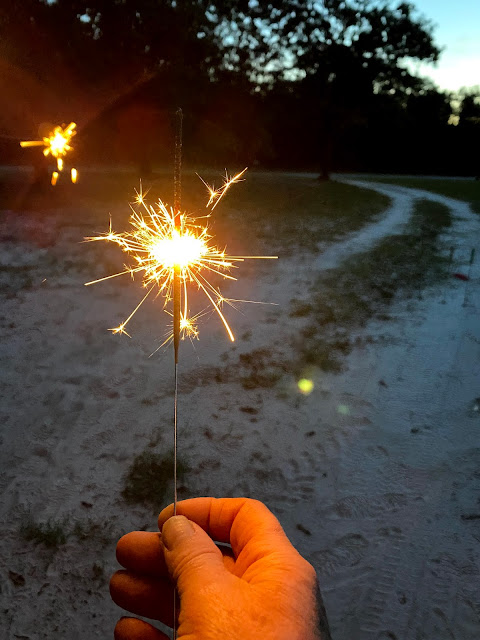 That is all for now.
Have a wonderful weekend and thanks for catching up with us.
Katie