It's day 51 of our self-imposed quarantine. Some days just kind of blend into each other. The last few days it's been nothing but rain rain and more rain. It's been kind of depressing. I've been keeping myself busy sewing, and Steve's been puttering around with a few inside jobs in the house.

Today we were surprised to find sunshine first thing this morning! The weather man said it wouldn't be coming around until later in the afternoon or evening and we were supposed to be cloudy and rainy most of the day. I guess he was wrong. We don't mind.

Steve decided that today would be the day to mount the hooks for the chains into the ceiling of the front porch. Yay! Today we were going to mount my porch swing!!

If you recall, a couple blogs back, I mentioned about finding this beautiful porch swing for sale on Facebook Marketplace. We bought it from the sellers, using social distancing, and brought it home. I painted it up and added a little square of red vinyl in the flip down cup holder. Steve added an extra little board to the back side of the cup holder to make sure things like our cellphone or our MP3 player wouldn't slide off the back end.

He got out his tools and with some very careful deduction he was able to determine where the main rafters were located underneath the beadboard ceiling of the porch. It had to have enough strength to support the heavy swing, as well as two adults and a couple beverages!!

With some measuring and some drilling of pilot holes he was able to determine exactly where the rafter was. We were lucky that it was in a perfect location to allow enough movement of the swing, but not advance it too far forward into the porch open space for our rocking chairs. With the tip of a long slim drywall saw he was able to slip in between the beadboard and check to see how wide and tall the rafter was, without having to tear down the beadboard. 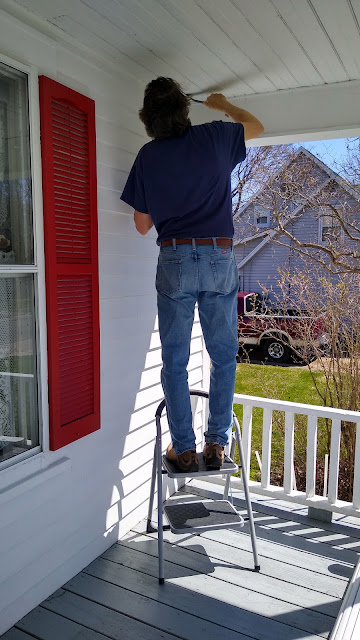 While he was working on the ceiling and getting the hooks into place, I started mounting the chains on to the arms of the swing.it sure cleaned up pretty with the two coats of paint and the added little red vinyl in the cup holder. 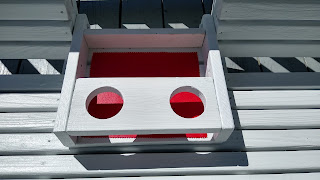 It didn't take very long before Steve had both of the lag screws securely mounted into the rafter.

The heavy chains and springs were included with the swing when we bought it. We were able to hang it up into place and adjusted to the exact height we wanted. 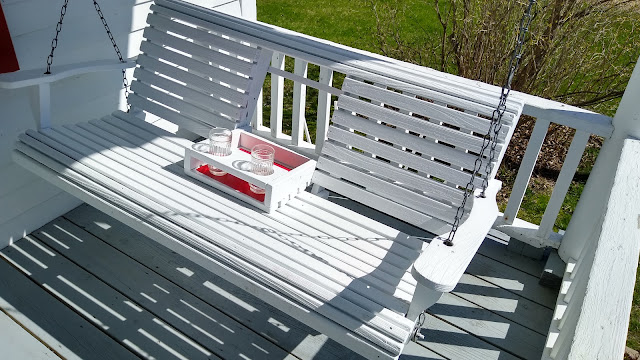 I have never, ever owned a porch swing before. I have always wanted one, and now it's finally making my dream come true. I cannot wait for the big lilac bush behind it to come into full bloom in a few weeks!!!  It is going to be heavenly to sit out there and smell the blossoms and listen to the birds. 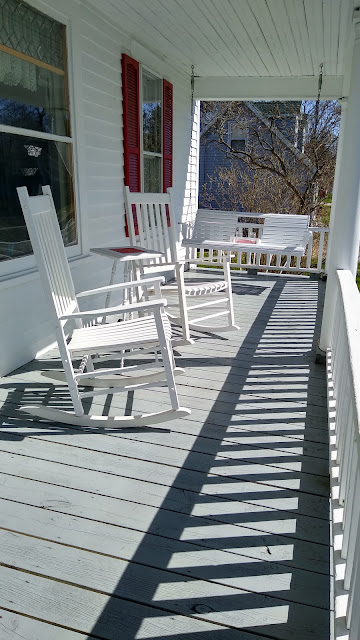 Steve carefully caulked up his little pilot holes as well as the sliced saw marks between the bead board that he made with the flat drywall saw. Now you would never know that he had done a little surgery to the ceiling to determine where the rafter was... PS, a stud finder did not work in this case... 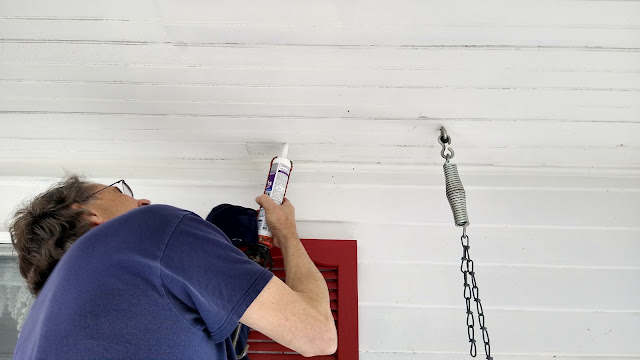 I think it just looks so naturally perfect there at the end of the porch. In that wider section of the porch we have our two rocking chairs and now the porch swing. In the narrower portion of the front porch in the foreground, we have the two little white chairs that I painted a couple weeks ago. Steve helped me recover the seats with red vinyl so they match too. Now when we have company, we can just grab these two extra chairs and bring them over to the other side of the porch. 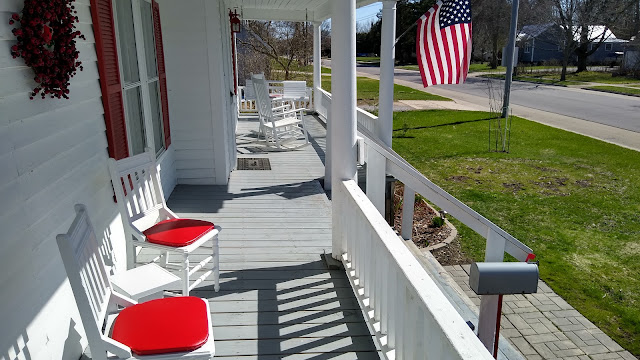 Ahhhhh
here are the two Honeymooners,
sparking on the front porch together. 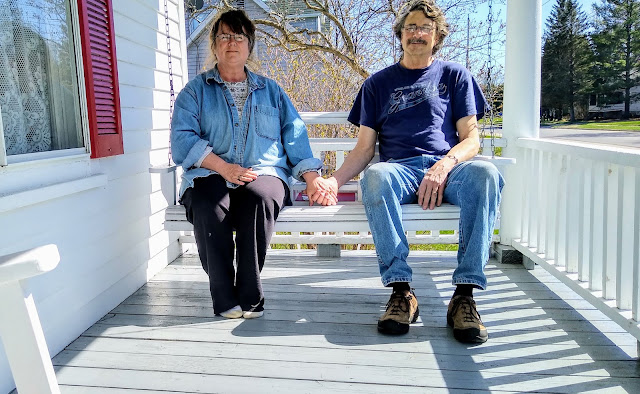 As I previously said, we had about three days of constant rain. I know we've got more than a couple inches total between all three days. Of course, that meant that our ponds were back again in the backyard!!!! 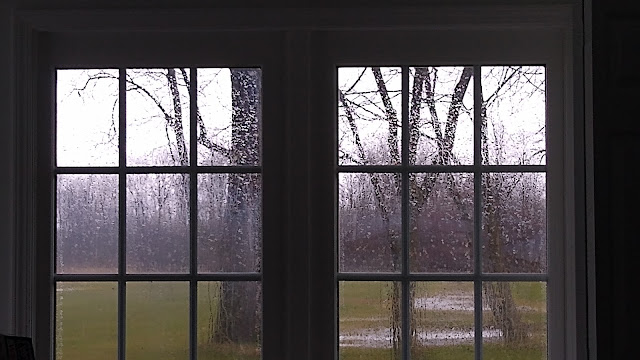 After Steve worked so hard
to drain them down
last week! 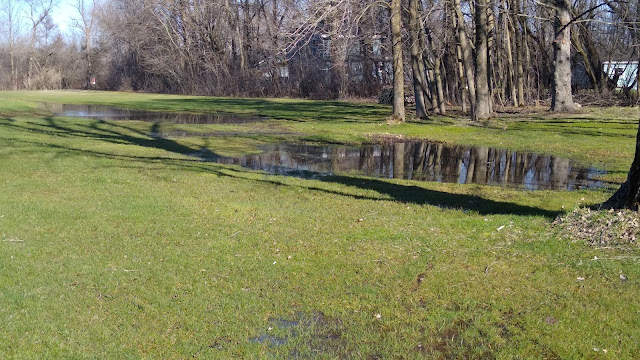 This week, he got a better idea. Instead of using that little extra sump pump, he decided he was going to "Go for the Gusto" and order a larger horsepower transfer pump. He found this one at Harbor Freight, and we arranged for a curbside pickup:  1/2-hp-cast-iron-transfer-pump  It was on sale plus an extra 20% off coupon. This made for a very fun toy for this boy to play with his mud puddles!!! 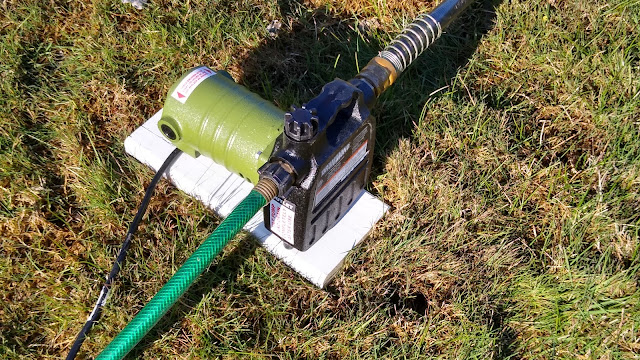 Now he got out his other hoses and he set up this pump. Soon he was moving large amounts of water down through the drainage line that he unplugged last week. 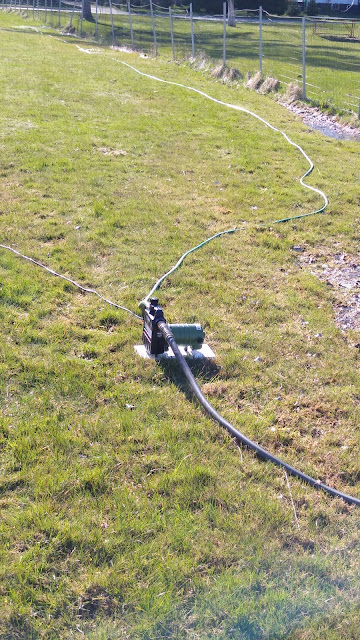 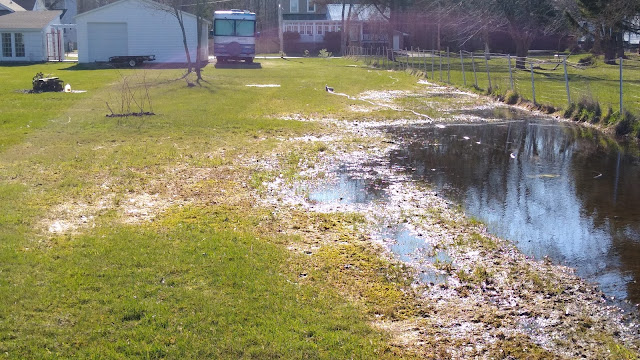 This area here
was all covered deep
in 8 to 10 inches of water. 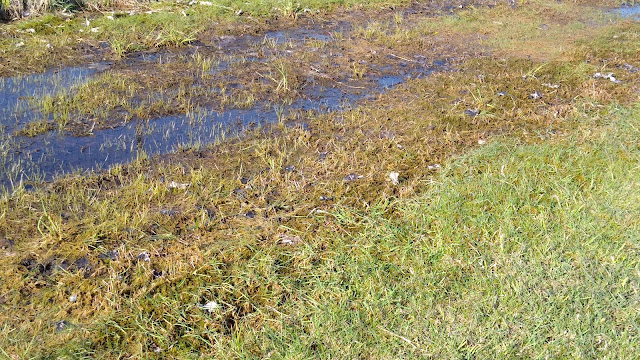 Just look at this happy boy,
playing with his mud puddles!!! 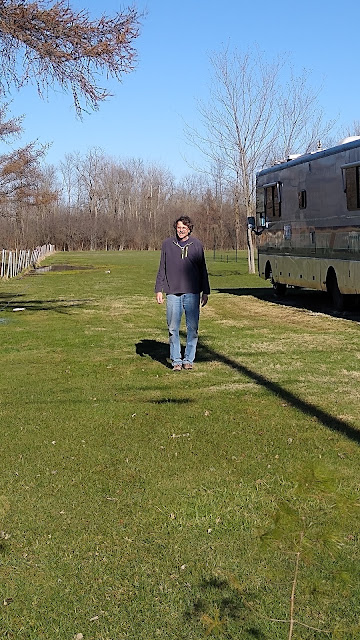 I will watch him
from the comfort of my porch swing,
thank you very much... 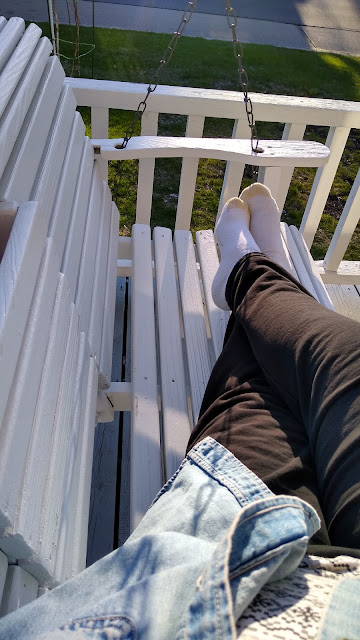 And So It Goes at our National Folk Farmhouse.
Please stay in,
stay safe,
stay healthy!